Godown Dog Park closes every Wednesday from 6:00am until projects are completed.

This facility has not yet been rated.

The Godown Dog Park will reopen on Monday, June 1st. 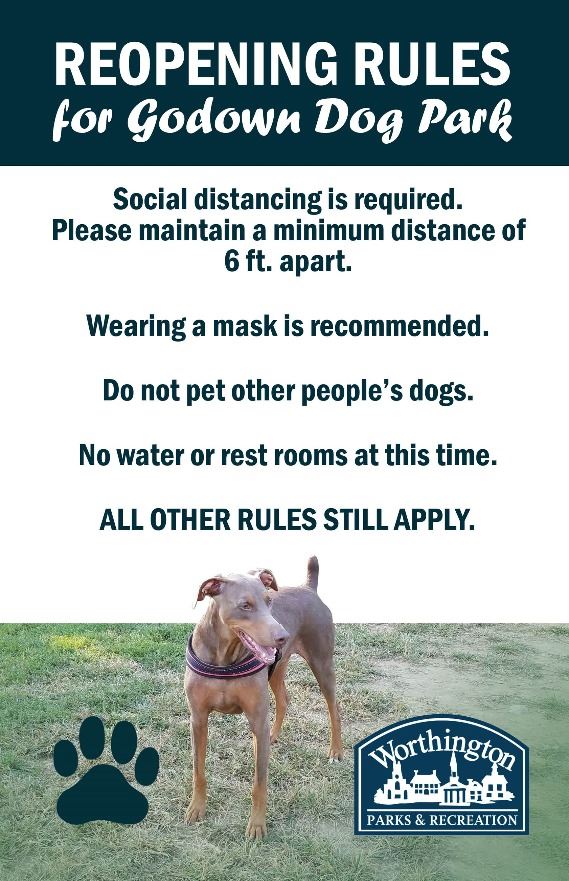 Established 2012 in partnership with the City of Columbus, Godown Park is a 10 acre park primarily developed as a dog park and consists of a one-acre small dog area, a four-and-a-half acre large dog area and also includes benches, a dog water fountain, pathways winding through the park and a paved parking lot. The land was acquired in 2000 and previously used by the Parks Department as a tree nursery. The park is open from dawn to dusk. Considerable support and fund raising were provided by W.O.O.F. (Worthington Organized Off-leash Friends).

The park is open from dawn to dusk.  Please comply with all Dog Park Rules.

A small portion of the park is also used by the Worthington Parks & Recreation Department as a tree nursery.  Native Ohio trees, such as sycamore, oak, buckeye and hickory, are being grown there and will later be transplanted along the river in the Olentangy Parklands to replace older trees as they die out.
Recreation Registration
eNews Sign Up
Service Requests
Permit Applications
[]