(September 11, 2021) - Thank you to the dozens of volunteers who planted these colorful reminders to never forget -- as we approach the 20th anniversary of the terrorist attacks on September 11, 2001. Community volunteers of all ages, including the Thomas Worthington High School Cross Country Team, Worthington American Legion Leasure-Blackston Post 239, the Worthington Divisions of Police, Fire & EMS, Parks and Recreation and other City Staff, City Council members, and more dedicated volunteers placed 2,977 small American Flags on the Village Green as a reminder to never forget the lives lost on September 11, 2001, recognize first responders, and raise awareness of the annual September 11th ceremony on the Village Green.

The Ceremony, organized by Worthington American Legion Leasure-Blackston Post 239, begins on Saturday, September 11th at 8:46 a.m. on the northwest Village Green to commemorate the exact time the first plane struck the World Trade Towers on September 11, 2001.

Keynote speaker Nina Parini, Executive Director of The Worthington Partnership, will share her first-hand experience of the events of 9/11/2001 from her perspective as a member of the U.S. House Sergeant at Arms staff. Working in the Capitol in Washington, D.C. that day, and privy to the House Leadership's response that morning and in the days following, she will share the lessons the team learned and how being spared by the actions of the brave passengers on United Flight 93 has shaped her life.

The program also includes music and other remembrances.

(September 11, 2020) - Although we cannot gather for the traditional Patriot Day ceremony on the Village Green this year due to restrictions on large gatherings to avoid the spread of COVID-19, the Worthington community is commemorating the anniversary of the September 11, 2001 terrorist attacks with these virtual programs and a display of 2,977 American flags on the Village Green. We will always remember those who lost their lives 19 years ago and will continue to remember and recognize first responders, volunteers and others who protect our safety and freedoms. Never Forget.

At Noon on September 11, 2020, the time when we would typically gather for the ceremony on the Village Green, this virtual remembrance is posted to continue our commitment to never forget the lives lost and all those impacted by the September 11, 2001 attacks on our country. This video ceremony includes remarks from representatives of the American Legion Leasure-Blackston Post 239, Worthington Division of Fire & EMS, Worthington Division of Police, and Worthington Mayor Scott Holmes, with a Patriot Day Proclamation. We invite you to watch the program below and read the Mayor’s Proclamation linked here. We also encourage you to never forget the lives lost, recognize first responders and volunteers, and give back in service to your community. Never Forget.

At 8:46 a.m. on September 11, 2001, hijackers crashed American Airlines Flight 11 into the North Tower of the World Trade Center in New York City. At 8:46 a.m. on Friday, September 11, 2020, three simultaneous flag ceremonies were performed in the Worthington community. The Village Green ceremony, presented by members of American Legion Leasure-Blackston Post 239, was streamed live on Facebook. Two simultaneous ceremonies took place at the Worthington Division of Fire & EMS and the Worthington Division of Police. View the ceremonies as they happened together at 8:46 a.m. Never Forget.

2,977 American Flags on the Village Green

A small group of volunteers planted nearly 3,000 American flags on the four corners of the Village Green in Old Worthington on Thursday, September 10, 2020.  Each of the 2,977 flags planted represents a life lost on September 11, 2001. They serve as a reminder to never forget. The Village Green flags, first planted for the 2019 September 11th remembrance, will be on display throughout the weekend. Although the number of volunteers planting the flags was limited this year due to crowd restrictions and social distancing requirements, event organizers will be looking ahead to future years when the community will be invited to help with the process. We hope you also fly your American flag at home as a symbol of remembrance. Never Forget.

The City of Worthington would like to recognize and thank the community volunteers, organizations and individuals who are instrumental in organizing the September 11th commemoration. Special thanks go out to Glenn Luksik, Commander of American Legion Leasure-Blackston Post 239, for organizing the program and coordinating program participants. We thank all members of the American Legion Leasure-Blackston Post 239 for their ongoing commitment to the City’s Patriot Day Remembrance, as well as the Memorial Day Parade, which commemorated its 100th Anniversary this year. We also thank community volunteer Suzan Singh for bringing her idea of planting 2,977 American Flags on the Village Green to the community and making it a reality. She is to be commended for her commitment to Never Forget and for conceptualizing this visual reminder. Thank you to all the volunteers this year, last year, and in future years for planting the flags on the Village Green. We would also like to recognize and thank the Worthington Parks & Recreation staff for their time and talents in organizing and producing the video components of the program and for their assistance with planting the flags on the Village Green. We are grateful for their hard work to bring this program to our community. Never Forget. 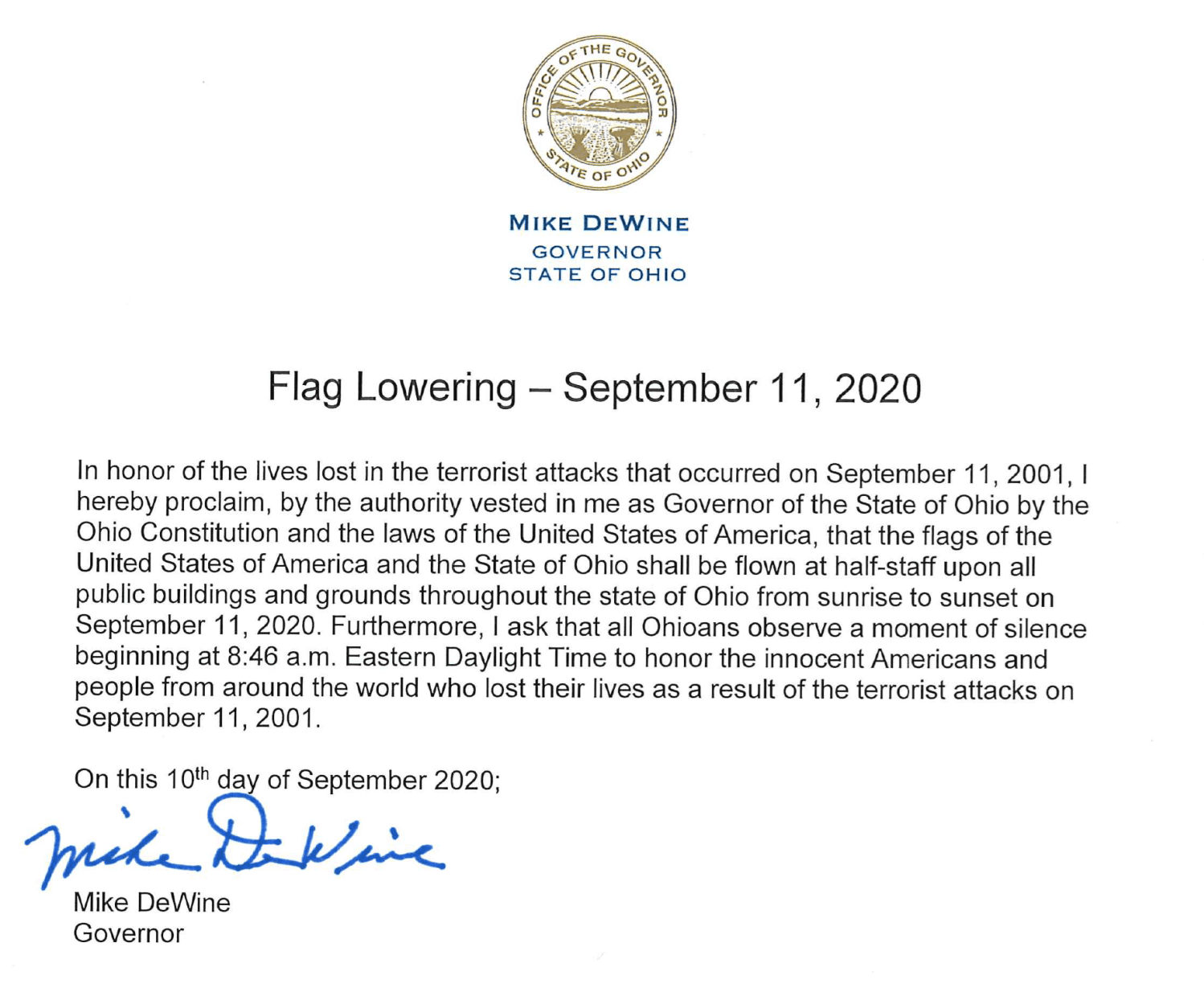 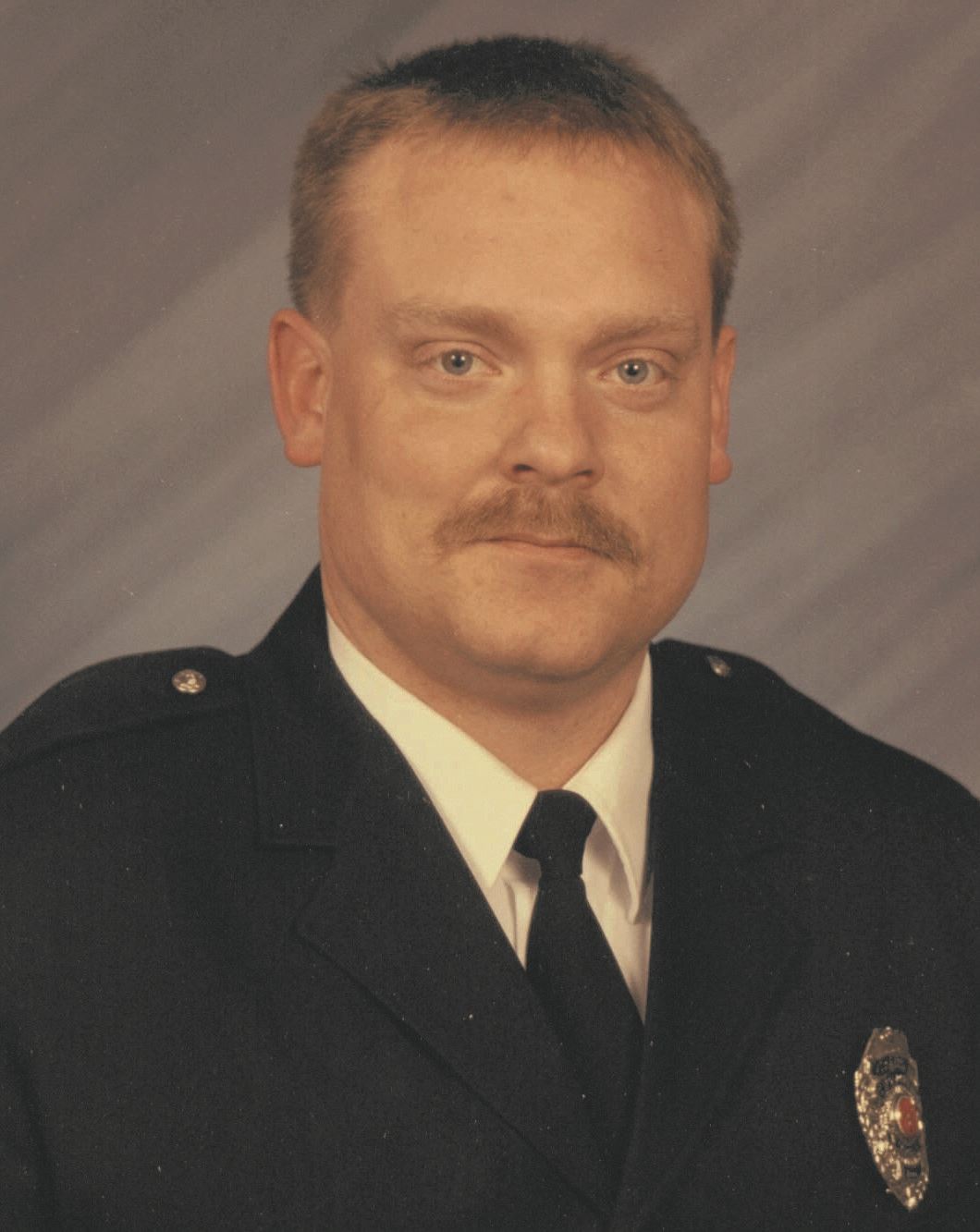 Throughout his career, which spanned from April 1995 to January of 2020, Dave Mierzejewski was the ultimate professional, whether he was in the role of firefighter, paramedic, fire inspector or arson investigator. He was a mentor to many and inspiration to all. The dedication he showed to the fire service and to the community he lived in and loved, was evident from his first day on the job to his last day. In the 4 years he lived with occupational cancer, his strength of will and perseverance to overcome the odds was an inspiration to all that knew him.

Mierzejewski is survived by his wife and two children, along with many family members and friends, including his brothers and sisters with the Worthington Division of Fire & EMS and the City of Worthington. He was honored with full Fire Department Honors during services on Tuesday, September 22, 2020. Worthington Division of Fire & EMS personnel were joined by members of multiple central Ohio Fire Departments for the ceremonies and procession from the funeral service at Worthington Christian Church to the burial at Walnut Grove Cemetery in Worthington. The large procession included fire trucks and emergency vehicles from multiple jurisdictions who gathered to show their respects to Firefighter/Paramedic Mierzejewski.

The full obituary can be viewed here