The playground is mostly installed except for one piece for the new zip line. We are waiting on that one piece to arrive so the last section can be installed, and the surfacing put down. The portion that is completed is undergoing inspection and is likely to open in the next few weeks.

The shelter houses are complete apart from the finalization of the electrical for the outlets. The grass area between the shelters will have an irrigation system installed and finally, the areas will be graded and seeded for grass. We will be able to open the shelters soon with limited use of the greenspace until the grass can establish.

The train observation area is nearly completed in terms of the site and concrete areas around the caboose. The contractor renovating the actual caboose is now underway and we expect their work to last about 3 weeks. Once they are finished, the area will be open. We will be working on a schedule for when the caboose can be viewed inside and communicating that by the fall.

The turf field (west field) used for soccer and field hockey is completed but will not open for usage until the spring to give time for the turf to establish.

There are some other finishing touches being put on for landscaping and general clean-up.

Lastly, design work is underway for phase two of the renovations which will address the ball diamonds, restroom facility, and the entrance to the park from Wilson Bridge Road. It will also complete the multi-use trail system which will include a half-mile loop trail around the park.

Work has accelerated with improved weather on the McCord Park Phase One Renovations. The two shelters and the rest of the asphalt pathways have been completed. Focus has now shifted to the playground construction with individual components being installed prior to the installation of the safety surfacing. Some irrigation and landscaping work will begin in early July and crews should begin renovation of the caboose in the train observation area on the same timeline. Overall, construction on phase one is scheduled to be completed by the end of July.

Despite shipping delays of the playground surface, work has continued at an accelerated pace on phase one renovations! The shelter houses have been built and attention will now turn to the concrete pads and landscaping. The entire shelter house area is expected to be completed by the end of June.

Construction is also underway on the new playground area. Workers have begun pouring the concrete footers and the connecting trail has been completed.  The playground surface is expected to be delivered soon and once it arrives installation of the equipment and structures will begin. The playground will feature a linear style “Ninja Warrior Challenge” installation.

Lastly, we received some exciting news this month! $450,000 of state funding will be applied towards phase two renovation expenses. This brings our total contributions to $850,000 for the entire project.

Thanks to warmer weather, work has continued at an accelerated pace! Both shelters have completed roofs and attention will now turn to finishing and landscaping. Construction has also started on the new playground area which will be replaced as part of phase one renovations. The new playground installation is scheduled to be completed by early summer.

Work has resumed on phase one with the installation of the two shelters.  Footers are poured and the construction of the structures will follow.  Soon, work will begin on the playground and its surfacing.  Other work still to occur this spring and early summer include finishing work around the Train Observation Area, landscaping and seeding around various areas of phase one, and small paved trail installation around the playground site and Community Garden.

Construction on phase one of renovations has gone dormant for the coldest winter months.  Work is on schedule with the following items to be completed once the weather allows in the spring:

Phase two of the renovations have been funded in the 2022 Capital Improvements Program (CIP).  The next step in that portion of the project will be detailed design work to include the ballfield renovations, replacement of the restroom and storage structure, completion of the looped multi-use trail system, realignment of the entrance drive, and significant drainage and turf upgrades.  Staff will be working with community partners and residents to get input on design in the upcoming months.

Construction continues at McCord Park though it may seem not much is happening as much of the current work is below ground or at grade with drainage for the full-size soccer field and parking areas, base-work for the multi-use trail and parking lot, and foundation work for the two new shelters.  As we progress through September we will start to see paving work along the trails and the new parking area in the northwest corner of the park, seeding of the soccer field, construction around the train observation feature, and additional preparations for the playground and shelter areas.

Construction on McCord Park is officially underway with the removal of the existing playground and removal of some small trees to make room for the enlarged soccer field and some of the parking adjustments.  Crews also began laying out the multi-use trail and excavating for its paving this week.  Beginning Friday, August 13, we will see pavement being removed in the parking area north of the Community Center, along the west drive in the park, and around the caboose in the train observation area. 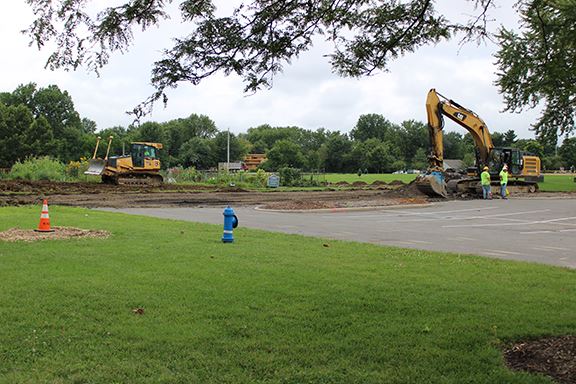 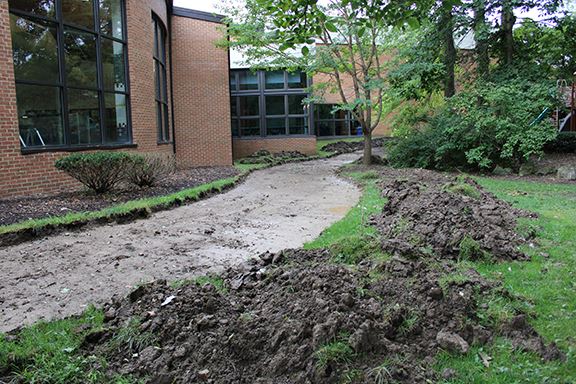 McCord Park Renovation Construction will kick off with playground demolition on August 3. We expect to see some demolition work including the removal of the playground on the west side of the park and some earth moving around in preparation for the enlarging of the soccer field and reconfiguring of some of the parking spaces. Work will also be starting on the creation of a Train Observation Area where the donated caboose has been sitting and the first portions of a multi-use trail that will eventually encircle the entire park.

The McCord Park Renovation Project has been broken into phases.  Phase one is underway and includes:

More images of what the redesigned park will look like 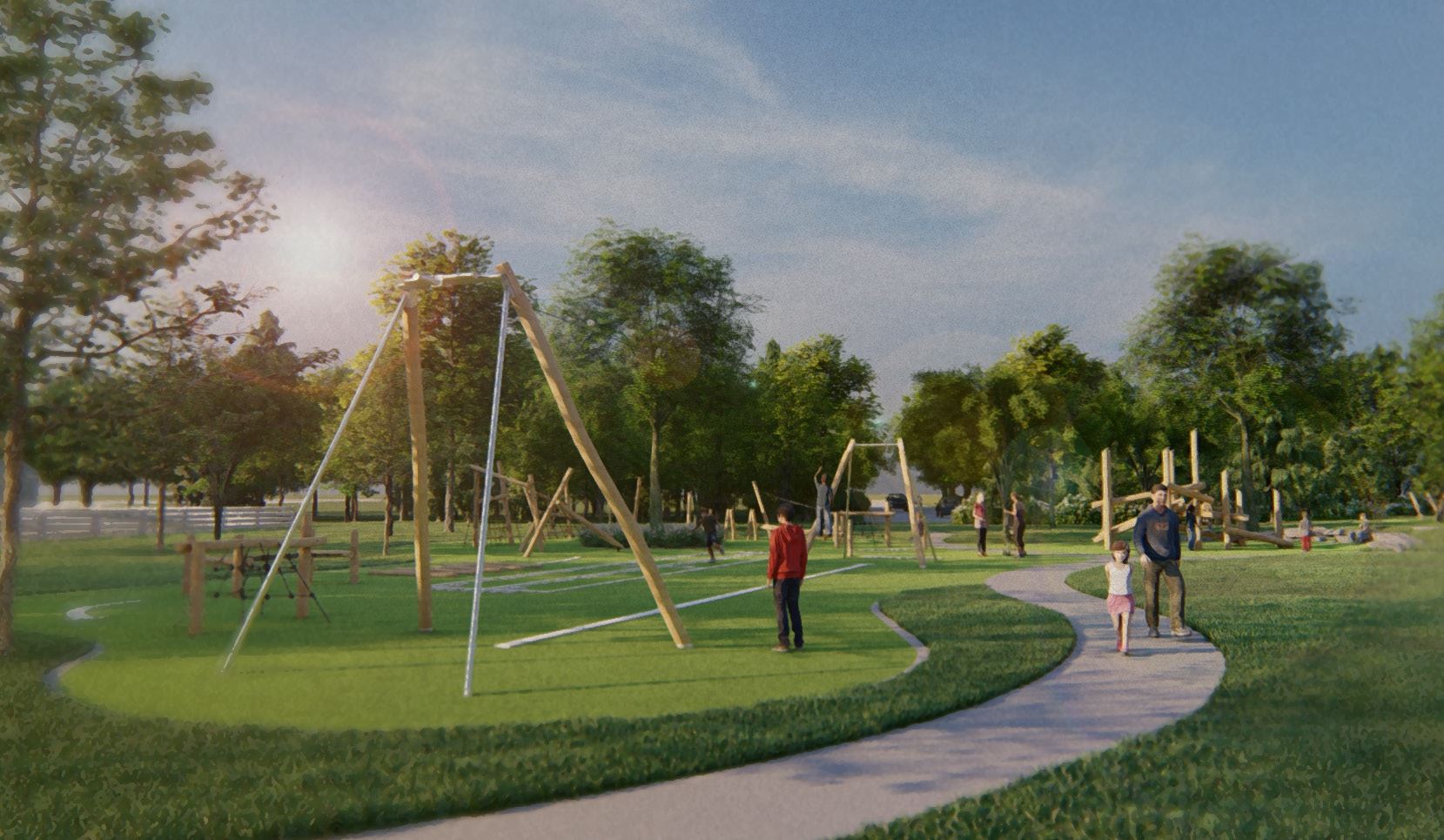 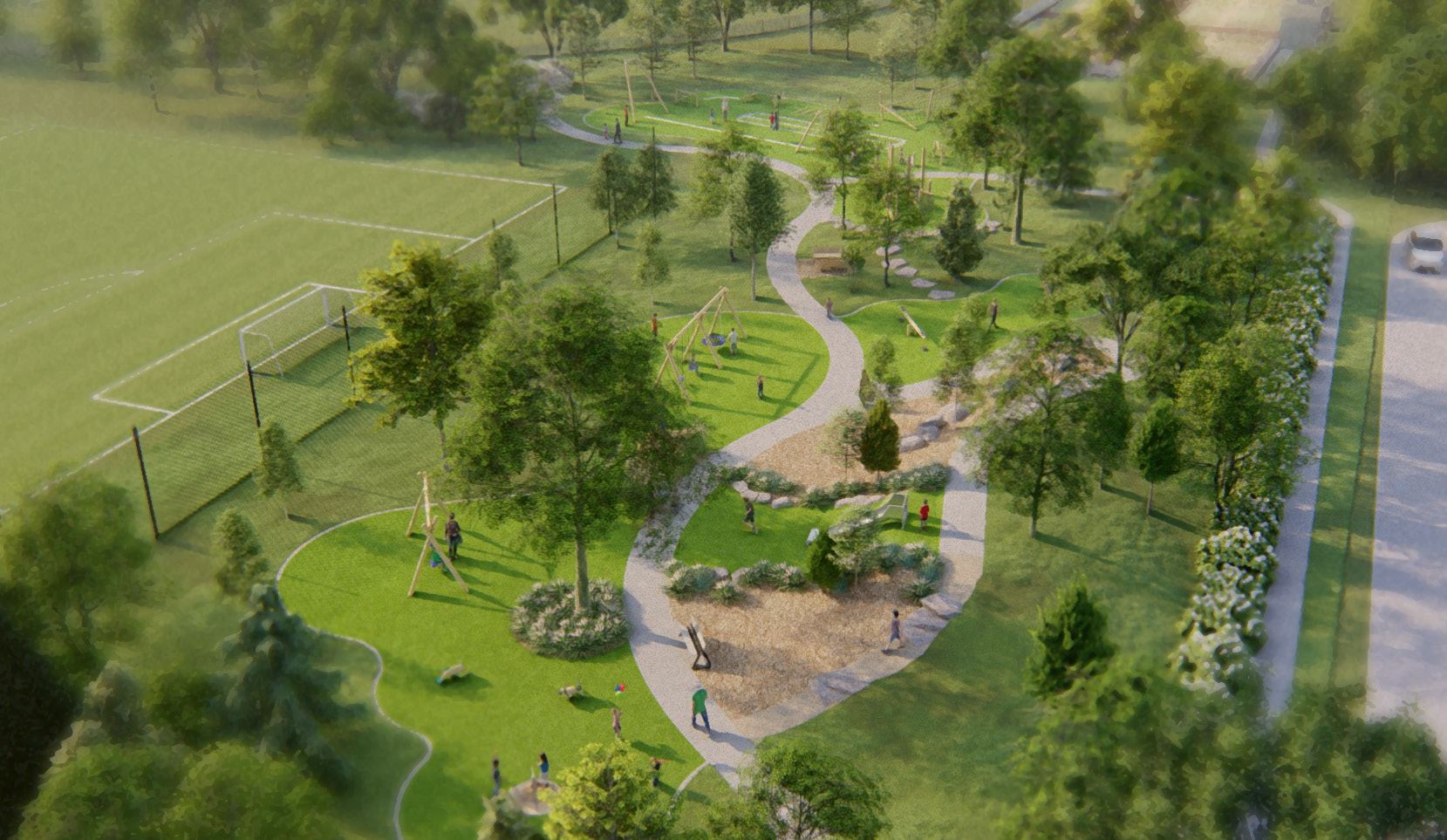 Phase two will include the renovation of the four ball diamonds, the restroom/storage facility, the realignment of the entry drive from East Wilson Bridge Road, and the completion of the multi-use trail system that will encircle the park.

The City of Worthington completed a Parks Master Plan in 2017 which identified the renovation of McCord Park as one of its most critical park improvements. The plan identified a variety of specific improvements to be considered including the replacement of the playground, the addition of a circular multi-use trail, replacement of the aging restroom facilities, and more.

City Council approved funding to complete a McCord Park Master Plan which would engage the public and stakeholders about what they would like to see in the renovation. At the completion of the planning process in 2018, City Council approved a Conceptual Master Plan which identified the desired amenities to be included in the park renovations. This plan served as the guide for the design phase which goes into more detail on those amenities including the playground, restroom, shelter houses, and more.

The City of Worthington contracted with POD Design, LLC on the final design and project management for bidding and construction.

McCord Park by the Numbers

Residents are encouraged to bookmark this page and check back regularly for updates. You can also contact the Worthington Parks and Recreation Department at 614-436-2743 for more information. 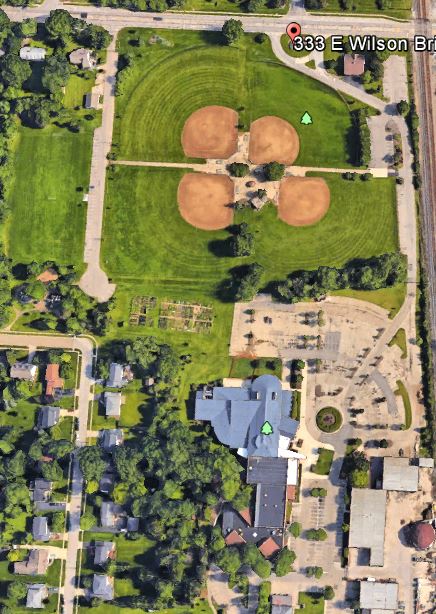 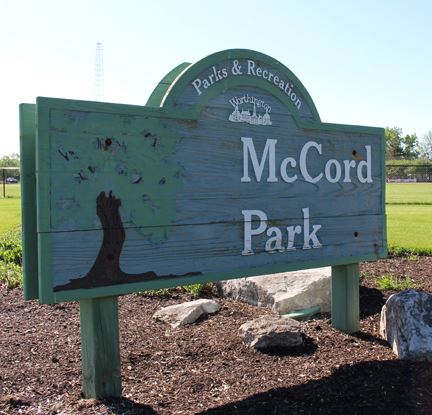 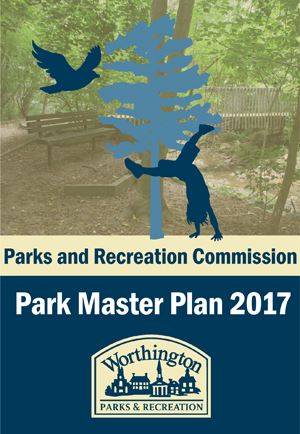 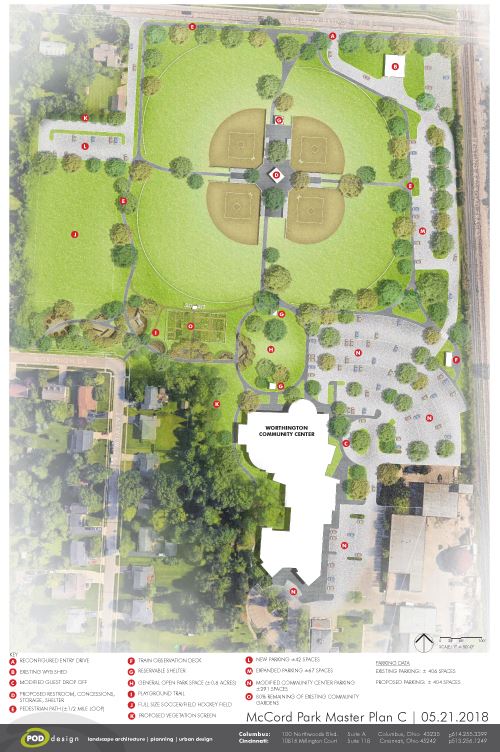 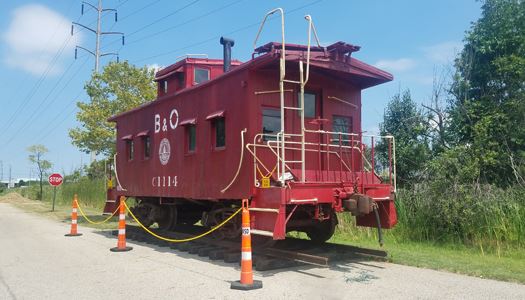 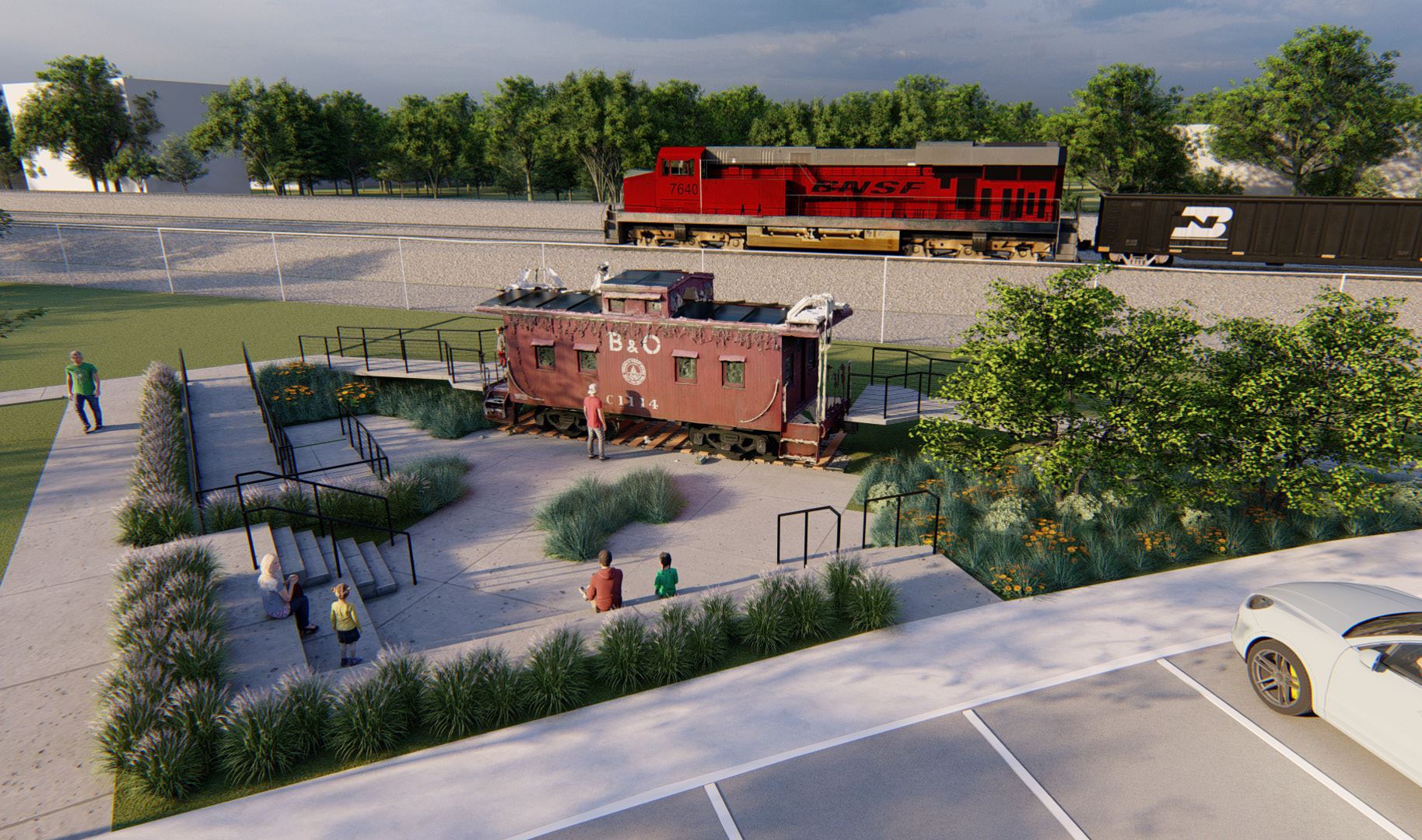 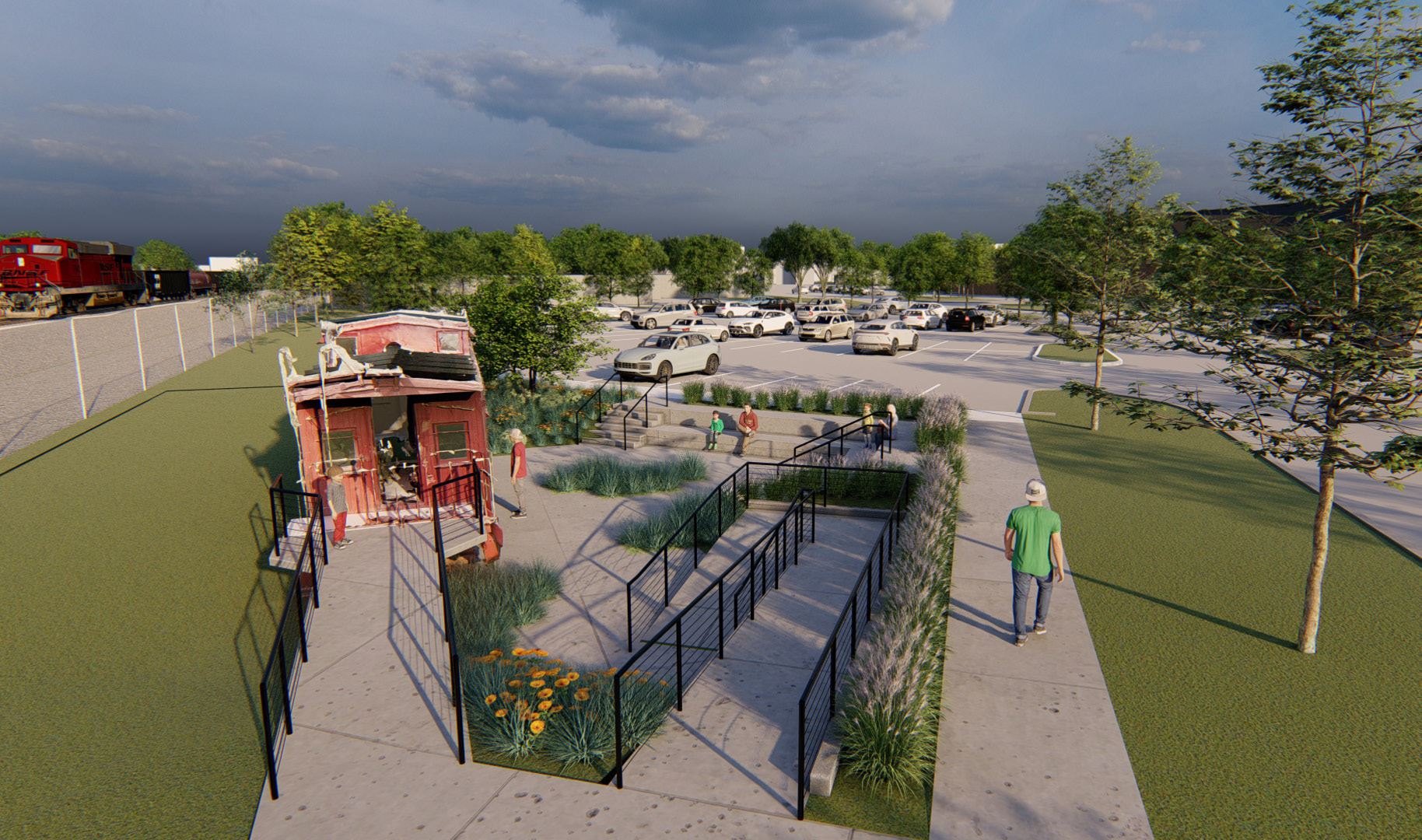