The Worthington Gateway project is on the April 8, 2021 Architectural Review Board and Municipal Planning Commission (ARB/MPC) agenda now that the required 60-day referendum period is over. MPC is expected to give approval to the final  Planned Unit Development (PUD) plan that was approved by City Council in January 2021. ARB is expected to approve building design, site layout and architectural features included in the plan. The Trivium Development proposal amends the PUD to permit the construction of a new 4-story mixed-use building that includes first floor retail/restaurants/office, second and third-floor office, and a boutique hotel on the fourth floor. Once the plan is approved by ARB/MPC, construction is expected to begin this summer.

On January 19, 2021, Worthington City Council approved a proposal to modify the PUD for the former Holiday Inn hotel site. After the required 60-day referendum period, Trivium Development is expected to come back to the Municipal Planning Commission for a PUD Final Plan approval and final Architectural Review Board approval for this portion of the site.

Revised architectural drawings have been submitted as part of the development application for the mixed-use building at the former Holiday Inn site. At the December 10, 2020 Architectural Review Board/Municipal Planning Commission (ARB/MPC) meeting, the MPC approved the request to modify the PUD for the former Holiday Inn hotel site. The recommendation will now be forwarded to City Council for final approval. The Architectural Review portion was tabled until after the PUD modification goes to City Council. If approved, the PUD modification is subject to a 60-day referendum period. The architectural portion will return to the ARB agenda after the referendum period has passed.

See the application with new renderings and site plan.

A new proposal has been submitted for a mixed-use building on the location that was previously approved for hotel development. The building is a mix of retail, restaurant, office, boutique hotel, and social club. It is being proposed by developer Tim Spencer of Trivium Development, which redeveloped the property at 350 W. Wilson Bridge Road in Worthington.

A development plan has been submitted to the Architectural Review Board and Municipal Planning Commission for review. No formal action is expected to take place initially, while details of the architecture are refined. See the proposal here

The Architectural Review Board and Municipal Planning Commission approved a revised design for the proposed Tru hotel.

The Architectural Review Board (ARB) approved an application for the building proposed for High Street at Caren Avenue at its December 12, 2019 meeting. The ARB and Municipal Planning Commission (MPC) also reviewed applications for a new Tru hotel. The applications were tabled after discussion.

December 5, 2019
The Board of Zoning Appeals will consider the temporary fencing and signage that is located at the site.

The City recently received an update on the Worthington Gateway project. Ohm Patel, CEO of The Witness Group and the developer of the former Holiday Inn site, presented the update at the November 18, 2019 City Council meeting. He shared the following about the revised project scope and construction timeline:

In coordination with the City, the property owner requested to rezone the property from the C-4 District (Highway & Automotive Services) to a PUD.  The owner also requested Preliminary and Final Plat approval for a Subdivision to create three (3) lots.  The property owner/developer has worked diligently with City staff over the past several years to get to the point where there is an approved project that has evolved over multiple public meetings addressing staff comments, board and commission comments and comments from the community.

Rezoning to a PUD gives the City and its citizens the assurance that what has been proposed will be built, maintained and that the mix of uses are agreed to in the future.  The City Council has also approved a Development Agreement and Tax Increment Financing Agreement.  Any modification to the PUD would require approval in the future. 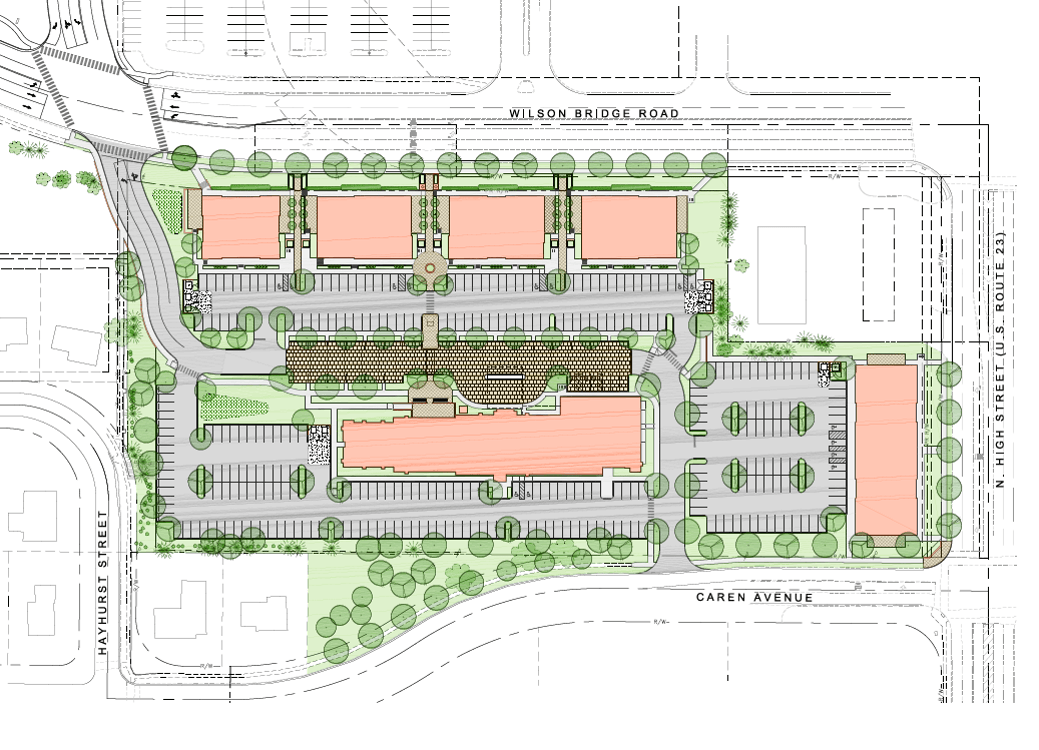 Demolition has taken place to raze the old Holiday Inn hotel, making way for the construction of the new Worthington Gateway. The west wings were demolished first beginning in December, with the remaining front restaurant and ballroom completed in January. Debris and the foundation will then be removed, with final site clean-up and grading completed by late winter to early spring 2019. 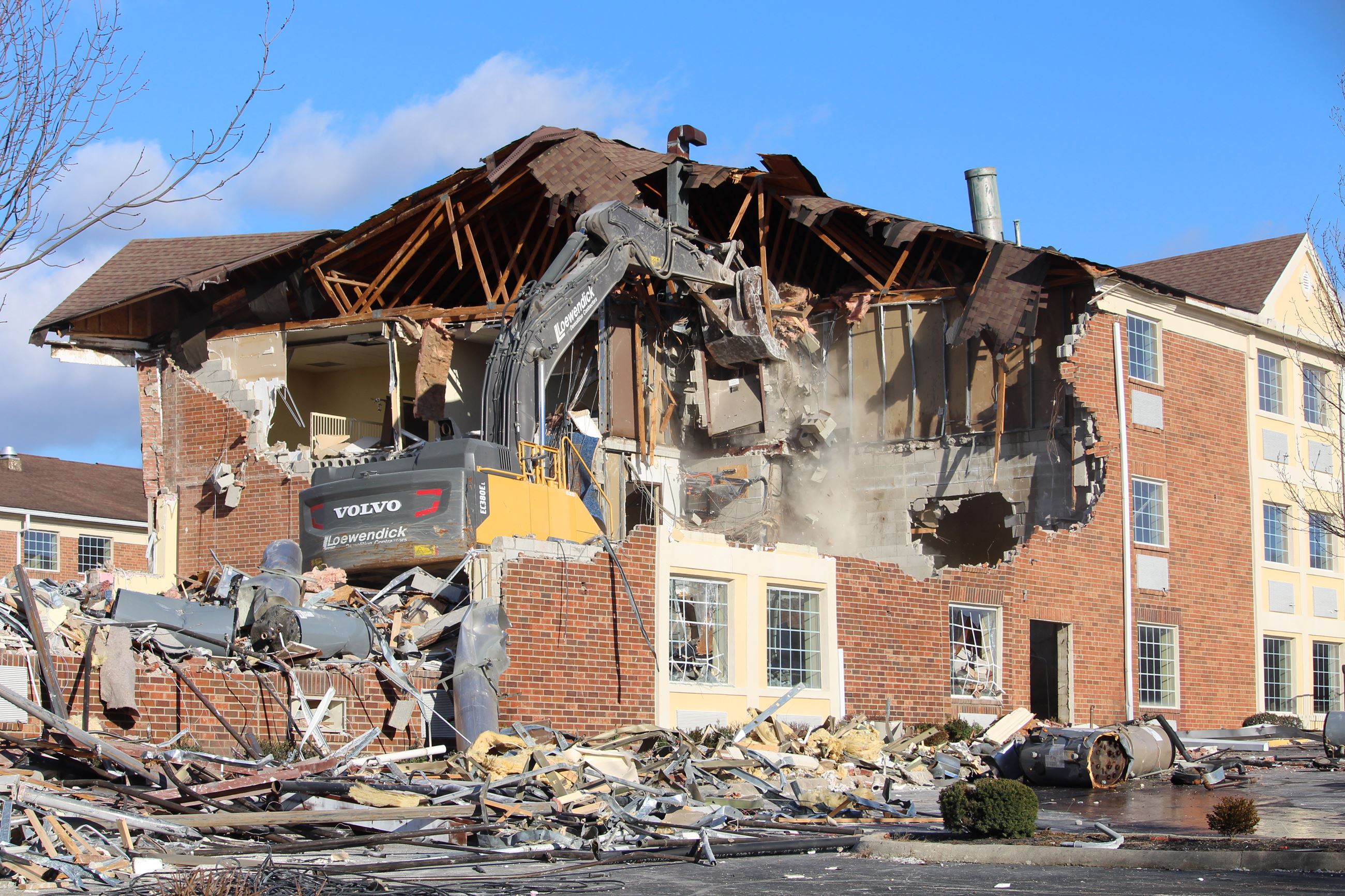 At its February 22, 2018 meeting, the Worthington Architectural Review Board (ARB) approved the site plan and architecture for redevelopment of the current Holiday Inn site. The ARB approved the plans submitted by property owner, the Witness Group, after a few modifications were made to the architecture of the two adjacent office buildings, and additional landscaping and screening was added to help screen the property from neighbors. Next, the Witness Group will be required to go to the Board of Zoning appeals to request variances for height, setback and parking.

The project includes one hotel with 111 rooms at four stories in height. The site plan also includes four buildings along West Wilson Bridge Road that range from 6,700 to 13,600 square feet and range from one to two stories in height. These are a mix of commercial and office space. Another building at the corner of High Street and Caren Ave is approximately 11,000 square feet. It will come back to the ARB at a future date for review. The site plan also shows a proposed alignment of the drives with the Shops at Worthington Place.

The Witness Group, has been working with the City over the past year on the redevelopment of the site to provide a mix of uses that would complement the Wilson Bridge Corridor.

For questions and comments to the City of Worthington, please call the Department of Planning and Building at (614) 431-2424 or by email.