The present-day growth of the deer population has its roots in the growth of the State of Ohio going back to the 19th century. In the early 1800s, a vast majority of the state was populated by mature forests with a diverse ecosystem. By the early 1900s, human actions cutting down the forests for farming activity and non-regulated hunting of the deer population, caused deer to generally disappear from the state.

However, in recent years the deer population has seen a resurgence with the growth of urban and quasi-rural landscapes. With a lack of natural predators to control population growth, continuing urban expansion, local ordinances prohibiting hunting, absence of disease, and adaptive food habits, deer populations have increased markedly with an estimated current population of 670,000 deer in the state. Differences in the amount of forest cover, agriculture, and human population density, however, have contributed to a patchwork of densities across the state.

White-tailed deer have become more common in Worthington. As Ohio‘s largest herbivore, white-tails feed on a variety of foods, and depending upon the season their diet may consist of bark, fruits, twigs, acorns, and an assortment of plants. Rearing one to three young per year; does are more communal and can be frequently seen in groups, especially in the winter months. Female offspring often stay with their mother for more than a year, but young bucks separate from their mother after about 12 months. More solitary, bucks start growing antlers in the spring. Antler size has less to do with age than with genetics and health. Antlers are shed in late winter and are quickly eaten by many small mammals for their high vitamin and nutrient content.

Whitetail deer are beautiful, graceful animals, but they can also cause concern, car strikes and landscape damage being the most common.

During this season, we may start seeing baby deer nesting in our neighborhoods, and you know mama is not too far away. During fawning, you may notice that does behave more defensively to protect their babies.  To help you know what to do or not do, check out these helpful  “Worthington Deer Facts.”

Being informed and vigilant helps us to avoid negative encounters with wildlife. 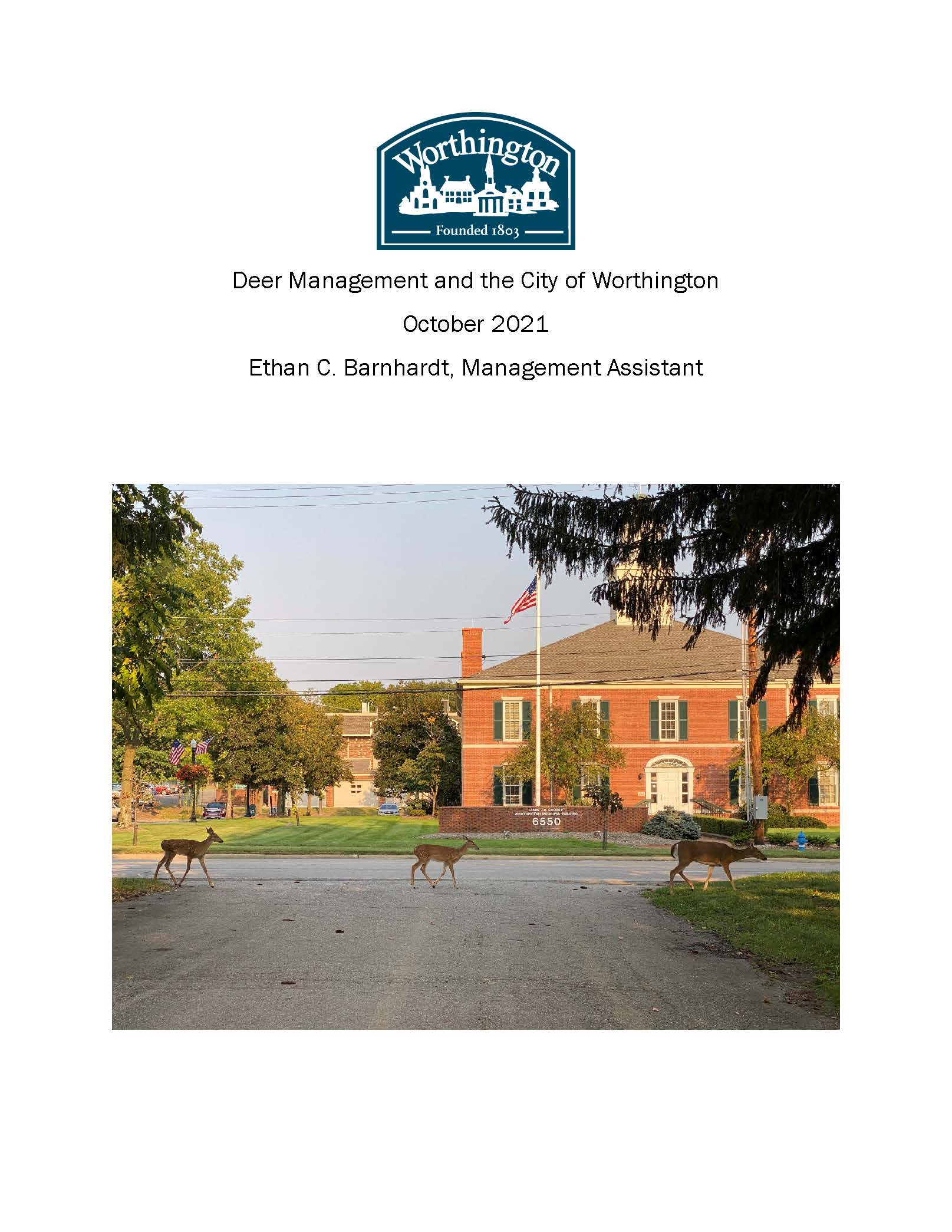 City staff has evaluated multiple methods for controlling the deer population and examined Worthington-centric data to evaluate the extent of the deer issue in the community.

This research paper contains case studies of other communities throughout Central Ohio that have utilized methods such as No Feeding Ordinances, Bow Hunting, Sharpshooting, and Birth Control in order to control their deer populations.